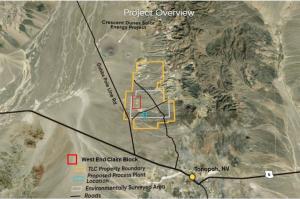 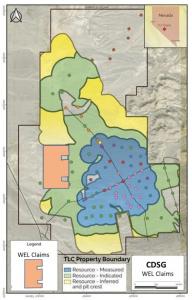 We are delighted that Mr. Alford will be joining the CDSG management team and providing his invaluable experience and leadership. Upon his appointment, Caren Currier will become the Chief Financial”
— Harp Sangha, President of CDSG
LAS VEGAS, NEVADA, UNITED STATES, January 25, 2023 /EINPresswire.com/ -- Battery Cell Production Projected to Grow Tenfold in the Next 5 Years creating Opportunity for Lithium Miners: China Dongsheng (Stock Symbol: CDSG)

 Agreement with American Lithium Minerals to Earn up to 60% Interest in their WEL Lithium Project.

 The WEL Project is Comprised of 24 Unpatented Lode Claims.

 Combined Measured and Indicated Portions of TLC Mineral Resource Grew from Previous Calculations of 5.37 Mt to 8.83 Mt LCE in the Latest Calculations.

China Dongsheng International, Inc. (OTC: CDSG) is an emerging company based in Nevada. The CDSG principal activity is acquiring and developing opportunities in the natural resource sector and complementary technologies.

CDSG holds an agreement with American Lithium Minerals Inc. (OTC: AMLM), a Nevada-based publicly held corporation, whereby CDSG will have the right to earn up to a Sixty Percent (60%) interest in the West End Lithium (WEL) Project in consideration of cash and stepped annual exploration expenditure commitments.

The WEL Project is comprised of 24 unpatented lode claims located fully within the outer boundary of the Tonopah Lithium Claims (“TLC”) property held by American Lithium Corp. (OTC: LIACF). The WEL project appears to be underlain by the same Miocene claystone rock sequences that host the TLC resource and CDSG is currently updating its geologic database prior to conducting drilling.

On January 24th CDSG announces the appointment of Mr. Craig Alford as a Chief Executive Officer. Harp Sangha, President of CDSG states, “We are delighted that Mr. Alford will be joining the CDSG management team and providing his invaluable experience and leadership. Upon his appointment, Caren Currier will become the Chief Financial Officer of the firm.”

North America’s capacity for battery cell production will likely grow more than tenfold in the coming five years and there is a deficiency of production. Consumer demand and government policies have been vital driving forces for the current rapid expansion of the battery metal sector. In October of 2022, the U.S. announced $2.8 billion in grants to boost U.S. production of electric vehicle batteries and the minerals used to build them. And now four of the world’s five largest battery makers, CATL, Panasonic, SK, and LG Energy Solutions have declared plans for production within the US, Mexico, and Canada.

Mr. Craig Alford holds both an Honors Bachelor of Science and a Master of Science in Geology. He is a registered Professional Geoscientist and is a Qualified Person, as defined in National Instrument 43-101. Mr. Alford’s experience began with Falconbridge Copper in the early 1980s and has since included leadership positions worldwide with independent, junior and senior mining companies including, Teck Mining, Zijin Mining Group, and China Railway Resources.

Mr. Alford has designed and provided management for projects throughout North and South America, SE Asia, China, Central Asia, Russia, Australia, and Africa. Craig has managed projects within a broad spectrum of mineralized and political environments, helped raise millions of dollars in capital for exploration projects, negotiated with several Heads of State, and assisted the World Bank and the China-Africa Development Fund in tax policy, planning, and investment risk.

He has been responsible for budgeting and the expenditure of hundreds of millions of dollars and developed economic analysis for large M & transactions. Mr. Alford’s tenure as Deputy General Manager with the Zijin Mining Group resulted in large investments in Pretium Resources, Kyrgyzstan’s Taldybulak Gold Mine, Norton Gold in Australia, Barrick Gold's Porgera mine and Ivanhoe Mines’ Kamoa Copper Project. During this crucial time for the battery metal sector, Mr. Alford has been involved in a number of base metal and lithium exploration projects key to the industry.

On December 14th CDSG provided an update on its West End Lithium ("WEL") project located just 6 miles northwest of Tonopah, Nevada.
The WEL project claims are located within and are surrounded by, the outer boundary of the TLC Project being developed by American Lithium Corp. ("American Lithium") (LI.V) (OTCQB: LIACF). American Lithium has done exceptional work throughout 2022 and has recently released a new NI 43-101 compliant resource for the TLC Project.

Dated November 29, 2022, the combined Measured and Indicated portions of the TLC mineral resource grew from previous calculations of 5.37 Mt to now 8.83 Mt LCE mainly from work conducted in a north and northwest direction from their previous drilling.

In its entirety, the TLC resource is now reported to contain 4.2 Million tonnes (Mt) of lithium carbonate equivalent (LCE) measured, 4.63 Mt LCE indicated and 1.86 Mt LCE inferred. The Lithium mineralization is hosted in shallow claystone which the US Geologic survey has identified as underlying both the TLC and WEL claims.

The WEL claim area possesses excellent access via gravel roads and the proximity to Tonapah offers access to skilled labor, water, and electricity. The CDSG Phase One program, which now includes planned drilling, should serve to complement the growing resource of the TLC area. CDSG management is looking forward to working with Barrel Energy (OTC: BRLL) on this project.

On November 16th CDSG announced that it will partner with Barrel Energy Inc (OTC: BRLL) ("Barrel") on its exploration and production endeavors with Barrel due to the highly innovative Lithium extraction methodologies Barrel is currently advancing for clay-hosted deposits.

The CDSG co-exploration program will begin in 2023 (subject to federal and state permitting) and timed well to provide a new lithium resource to help meet the ever-growing demand.

DISCLAIMER: CAP/FrontPageStocks/CorporateAds.com (CA) is a third-party publisher and news dissemination service provider. CAP/FPS/CA is NOT affiliated in any manner with any company mentioned herein. CAP/FPS/CA is a news dissemination solutions provider and is NOT a registered broker/dealer/analyst/adviser, holds no investment licenses, and may NOT sell, offer to sell, or offer to buy any security. CAP/FPS/CA’s market updates, news alerts, and corporate profiles are NOT a solicitation or recommendation to buy, sell or hold securities. The material in this release is intended to be strictly informational and is NEVER to be construed or interpreted as research material. All readers are strongly urged to perform research and due diligence on their own and consult a licensed financial professional before considering any level of investing in stocks. All material included herein is republished content and details which were previously disseminated by the companies mentioned in this release or the opinion of the writer. CAP/FPS/ CA is not liable for any investment decisions by its readers or subscribers. Investors are cautioned that they may lose all or a portion of their investment when investing in stocks. CAP/FPS/CA has been compensated $500 by a third party for the dissemination of this article.

These news releases and postings may contain forward-looking statements within the meaning of the Securities Litigation Reform Act. The statements reflect the Company’s current views with respect to future events that involve risks and uncertainties. Among others, these risks include the expectation that any of the companies mentioned herein will achieve significant sales, the failure to meet schedule or performance requirements of the companies’ contracts, the companies’ liquidity position, the companies’ ability to obtain new contracts, the emergence of competitors with greater financial resources and the impact of competitive pricing. In light of these uncertainties, the forward-looking events referred to in this release might not occur.

For inquiries or corrections to Press Releases, please reach out to EIN Presswire.
✕
× Close Ad