Edit: This article originally incorrectly stated Ms. Valley helped start the MAAC Clothing Depot. It has been around for 30 years, and she has been a volunteer for 10 years.

MEDINA, N.Y. (WIVB) — This story starts in 1969. That’s when Kathleen Valley moved to the Village of Medina.

Fast forward to 2021, we got a chance to stand inside one of her biggest accomplishments.

Kathleen opened P.Raising Kids Child Care Center 11 years ago. She and her colleagues worked hard to keep it afloat at the onset of the coronavirus pandemic.

“The board took turns because we were afraid of germs and all the rest of it, we took turns and came and painted, and cleaned, and organized, and scraped and did everything we could to reopen and be ready for our families,” Valley said.

Now that it’s back open, Kathleen has bigger plans.

“Our fundraising right now is trying to find a larger location so we can get to all the families on our waiting list.”

“Almost 50 years later, he came forth with a wonderful donation to the childcare center, which is now in the same building where I started my nursery school back in 1976,” Valley said.

Both Kathleen’s former nursery school, and now the much newer child care center she’s also behind, are housed in the same Medina United Methodist Church building.

“So what goes around comes around,” she said.

Valley says she learned a lot from her own childhood being raised as one of nine children.

“As far as being one of nine, it was a great preparation for teaching because you learned patience. You learned that people cared about you. You learned to see lightbulbs go off when kids learned something; that was always so much fun,” she said with a smile.

Yet still, the majority of her work with children — three decades of it — happened at Oak Orchard Elementary School.

One of her proudest legacies in her 30 years of working with 3rd and 4th graders was starting up an annual trip to Albany.

Like with most of her projects, Kathleen and her 4th grade colleagues put in the extra time to raise thousands of dollars each year to make it happen.

She helped take her students to see more of Western New York, too.

At Oak Orchard, Kathleen also started T.O.Y.S., “Taking Our Youth Seriously,” in which kids wrote letters to adults they looked up to and invited them to visit.

“We had so many visitors that were just unforgettable. We had engineers and doctors and lawyers and grandparents, who built and created beautiful quilts, or whatever,” Valley said.

Today, two of the staff at P.Raising Kids Child Care are her former students; something Valley is very proud of.

Through all her work with other kids, Kathleen also raised three of her own. All, not surprisingly, are successful.

Her son Eric, nominated her as a Remarkable Woman.

As Medina’s Athletic Director, he too took on a career in schools. It’s a role that he says helped him understand just how deep his mother’s legacy is.

“I’ve had many, many people over the years say ‘Oh, I had your mother in class, and she was amazing, my favorite teacher.’ And these are people in their 40s and 50s now, who still remember their 4th grade teacher,” Eric said.

A former student athlete who had a lot of coaches and mentors, Eric Valley says his life so far has revealed just what his mother means to him.

“She was greatest coach,” he said.

Kathleen’s reach in Medina goes on.

She volunteers for the “MAAC Clothing Depot,” a secondhand store, where money from clothes sold goes to about 25 non-profits in Orleans County.

She was a leader in starting Medina’s famous “Parade of Lights,” she’s worked at Creekside Floral over the past 40 years, and Valley also volunteered with Habitat for Humanity for years.

Remarkably – pun intended – Kathleen Valley’s legacy reaches into so many parts of Medina, but most importantly in all the kids she’s helped – those who are grown up and those whose lives are just beginning.

China’s Xi at Saudi palace to meet royals on Mideast …

Arrest made tied to July killing in Chautauqua County

China’s Xi at Saudi palace to meet royals on Mideast …

Why the US was able to bring home Brittney Griner …

Everything you need to host New Year’s Eve

Arrest made tied to July killing in Chautauqua Co. 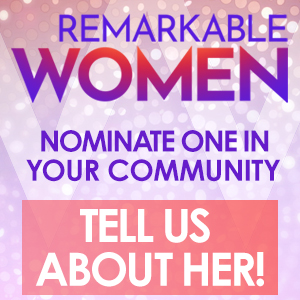 Thanks for signing up!

Watch for us in your inbox.